Hei, hopefully some people still read my blog, even though I don't update as often as I want to ^^

Well but still here is a little update about the last two months: 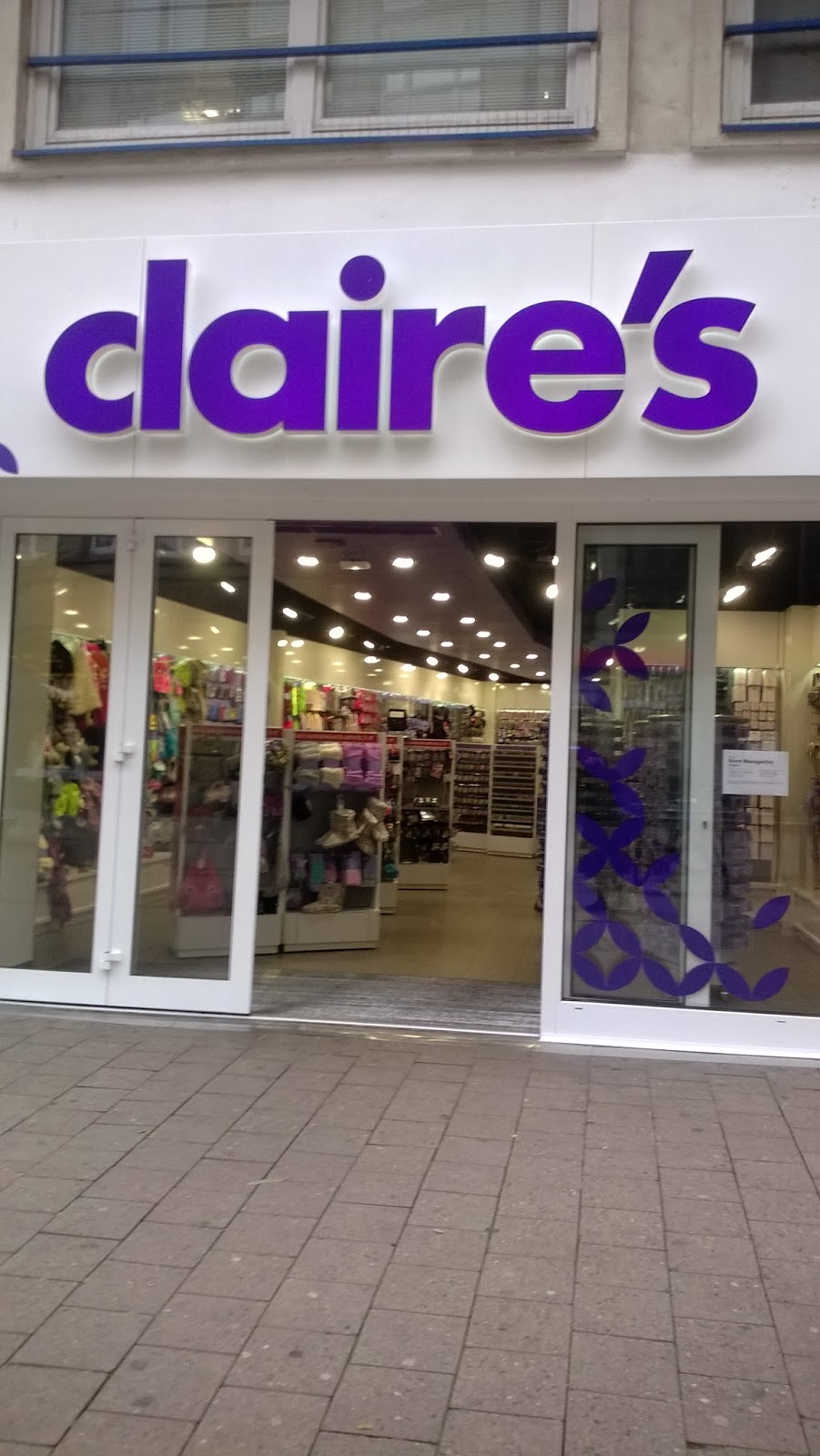 My favourite jewelery store finally also opened a shop right in the city of Hamburg :D They have everything you want: necklaces, bracelets, piercings, hair stuff, etc. And it's also in so many different styles, like lolita, goth or just normal ^^ I f you ever come to Hamburg, you have to go shopping there! ;D 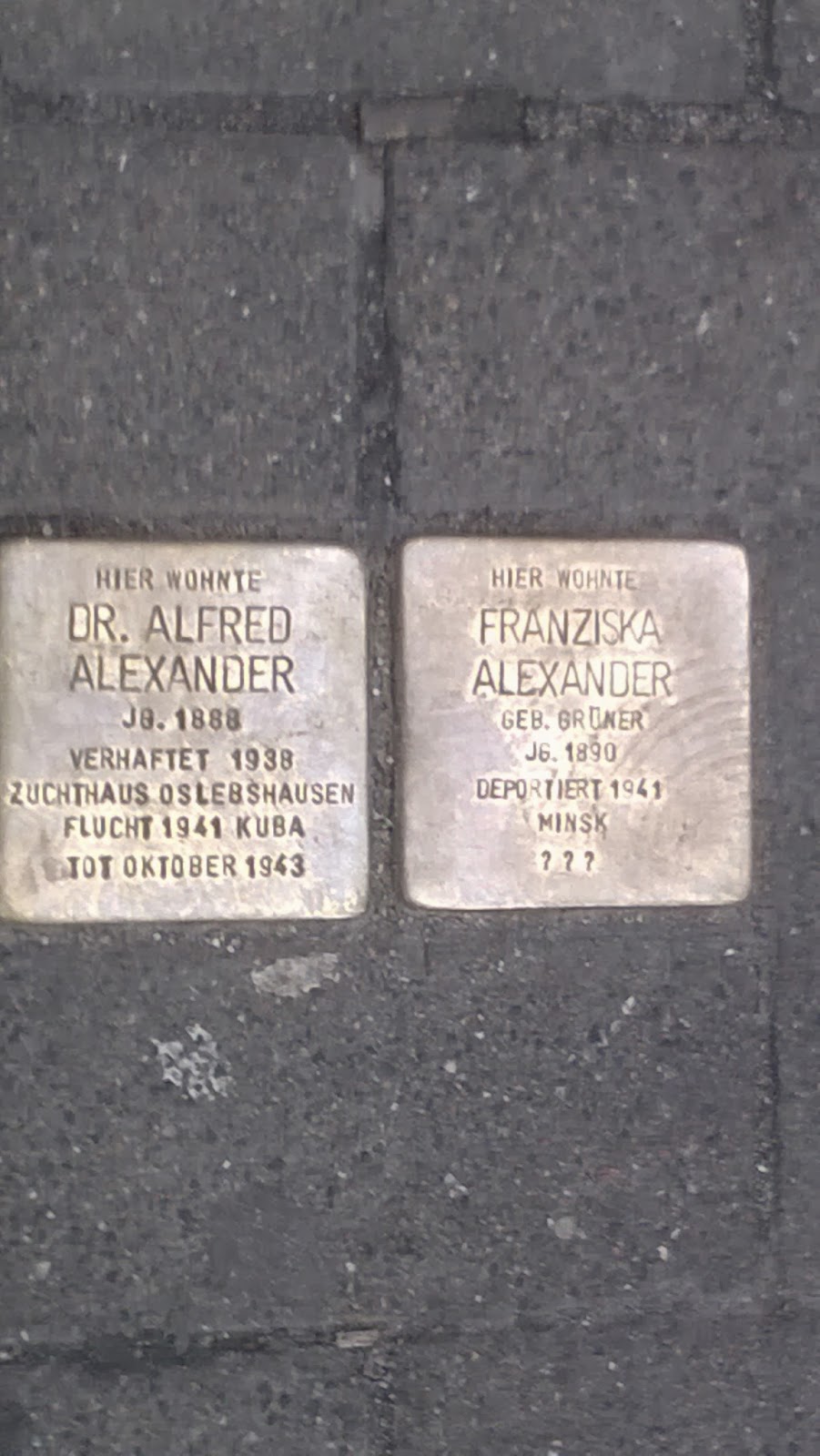 These little stones are called 'Stolpersteine' you can find them everywhere around Hamburg. They are put to places where the last whereabouts of some Jews where, before they were deported. I think it is really important to keep in mind, what happened in Germany, and so it was really interesting making an alternative city trip with my class. We learned about places where the Nazis commited their cruel crimes and also about places where Jews had had shops before 1933. So if you visit Hampurg someday, pay attention to the the streets, maybe you will also discover some 'Stolpersteine'


Now to a less serious topic, outfits I wore: 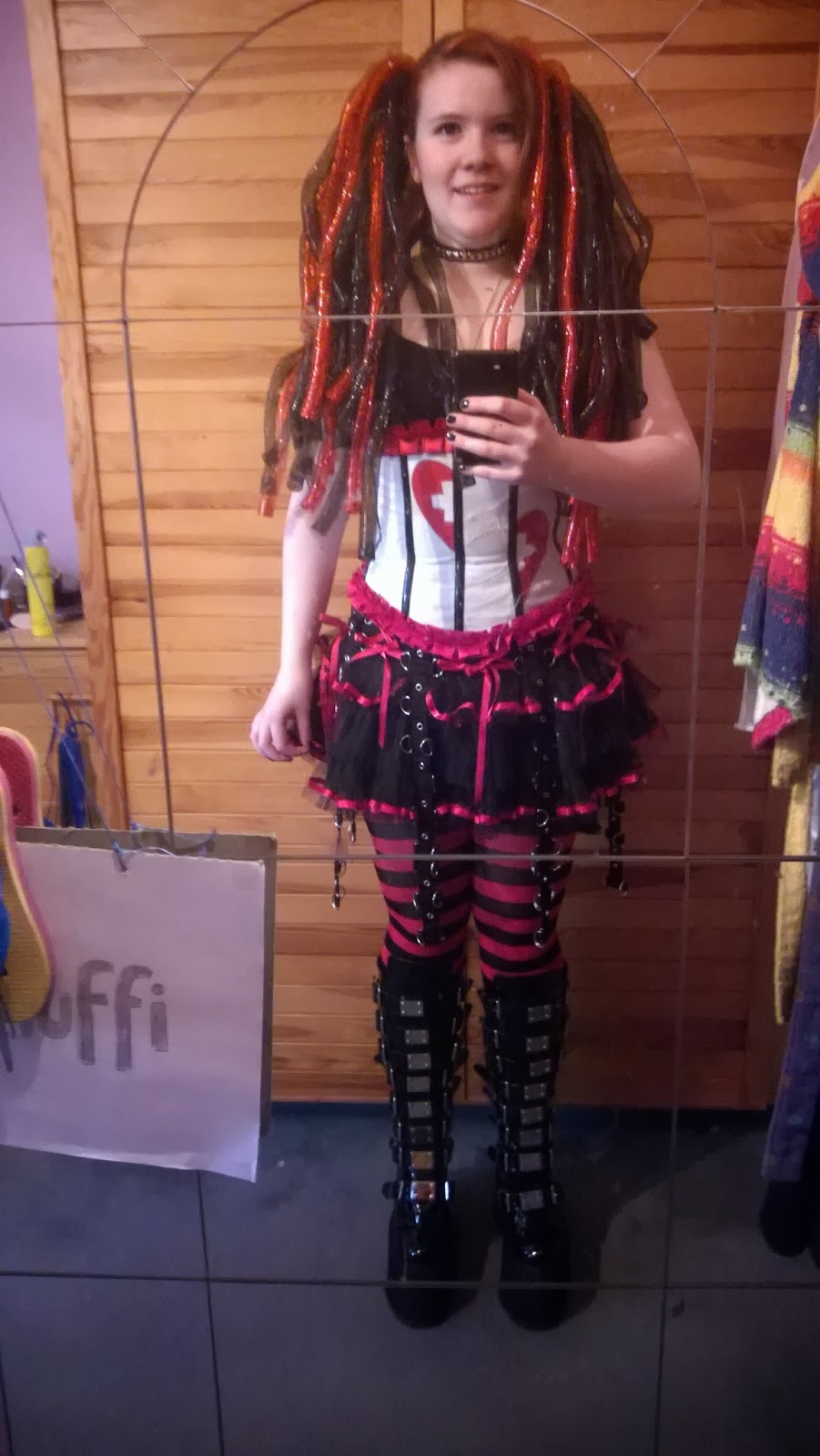 Our local goth store had sale, so I bought a pair of cyberlocks (10€)
The corset and skirt I bought at Colours in Lübeck shortly before they closed (about 40€ for both)
The shoes I got online from darkages.de, they are Demonia Swing 815 (about 100€)
I wanted to wear this outfit for 'Schwarze Nacht' (a gothic party in Hamburg) but I fell asleep and missed it xD 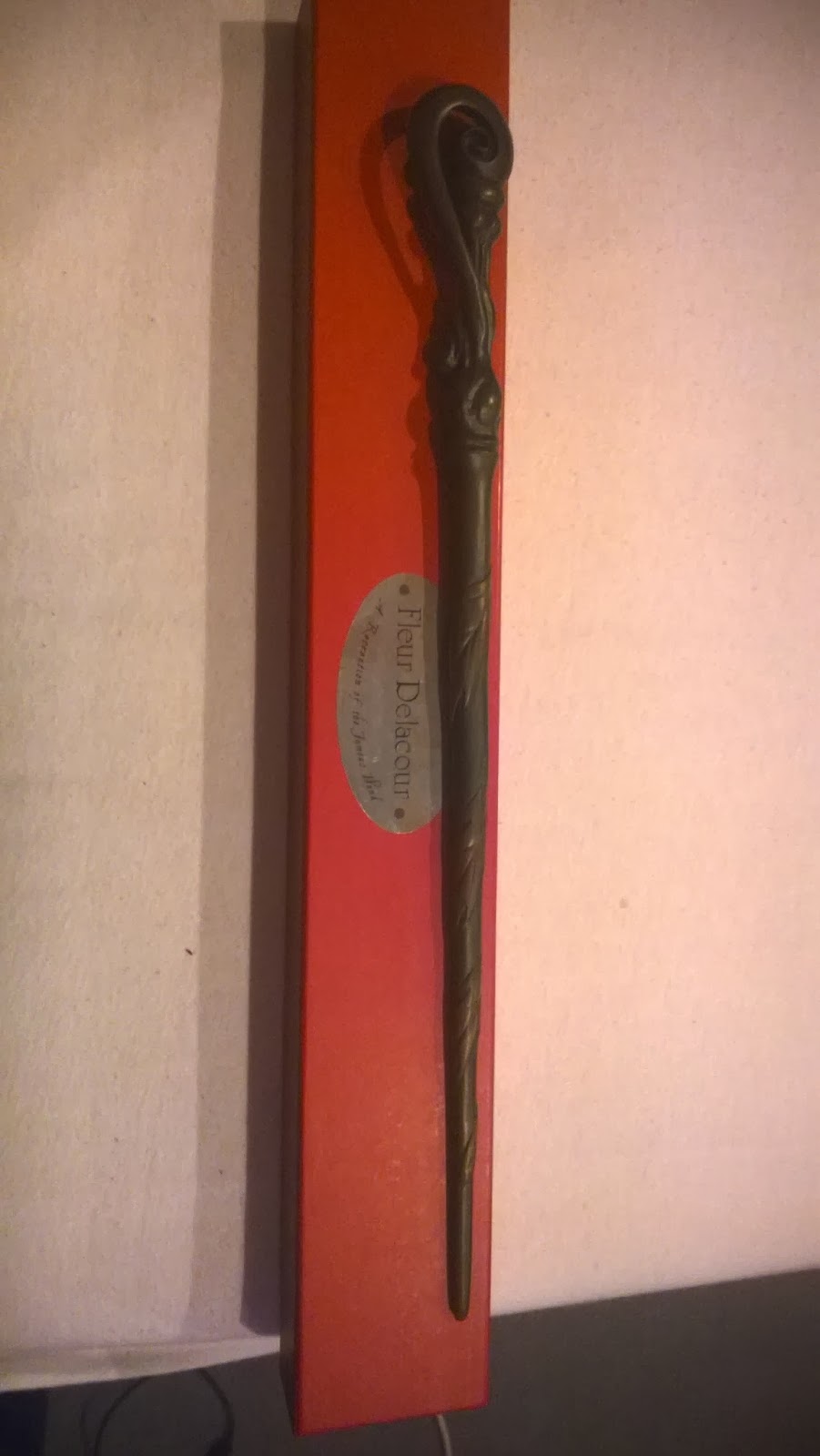 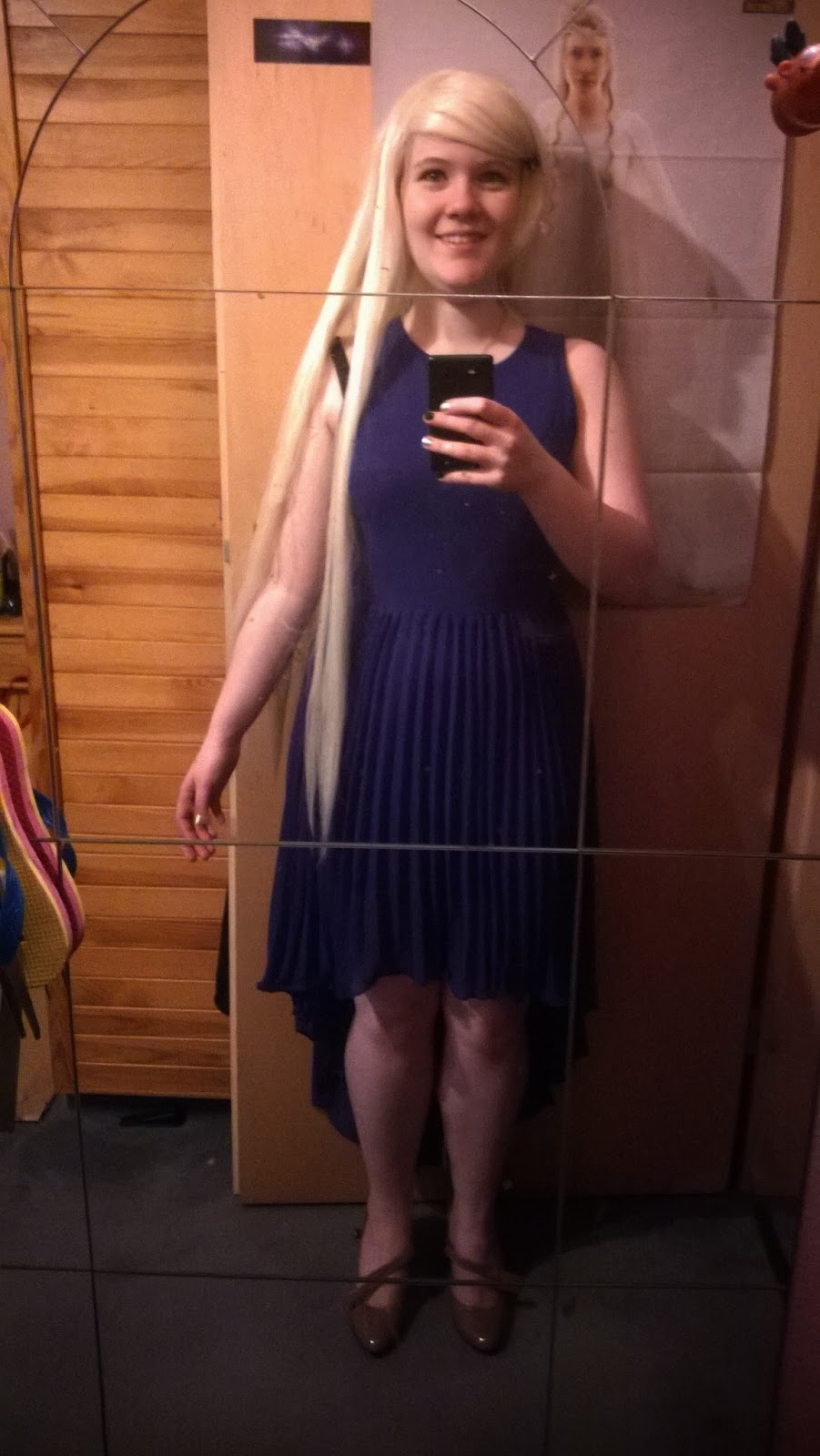 Carnival is only celebrated in more southern parts of Germany (like Cologne or Düsseldorf), but at our schools we had something called 'Crazy Days'. We get a topic for a Day and everyone can dress up. On Thursday we had a colour for every grade (boring), but I wasn't at school that day.
On Friday the topic was Harry Potter and I decided to use my long blonde wig and go as Fleur Delacour (I even have the wand :3)
But of course, I was the only one with a costume (my school is so boring :S) 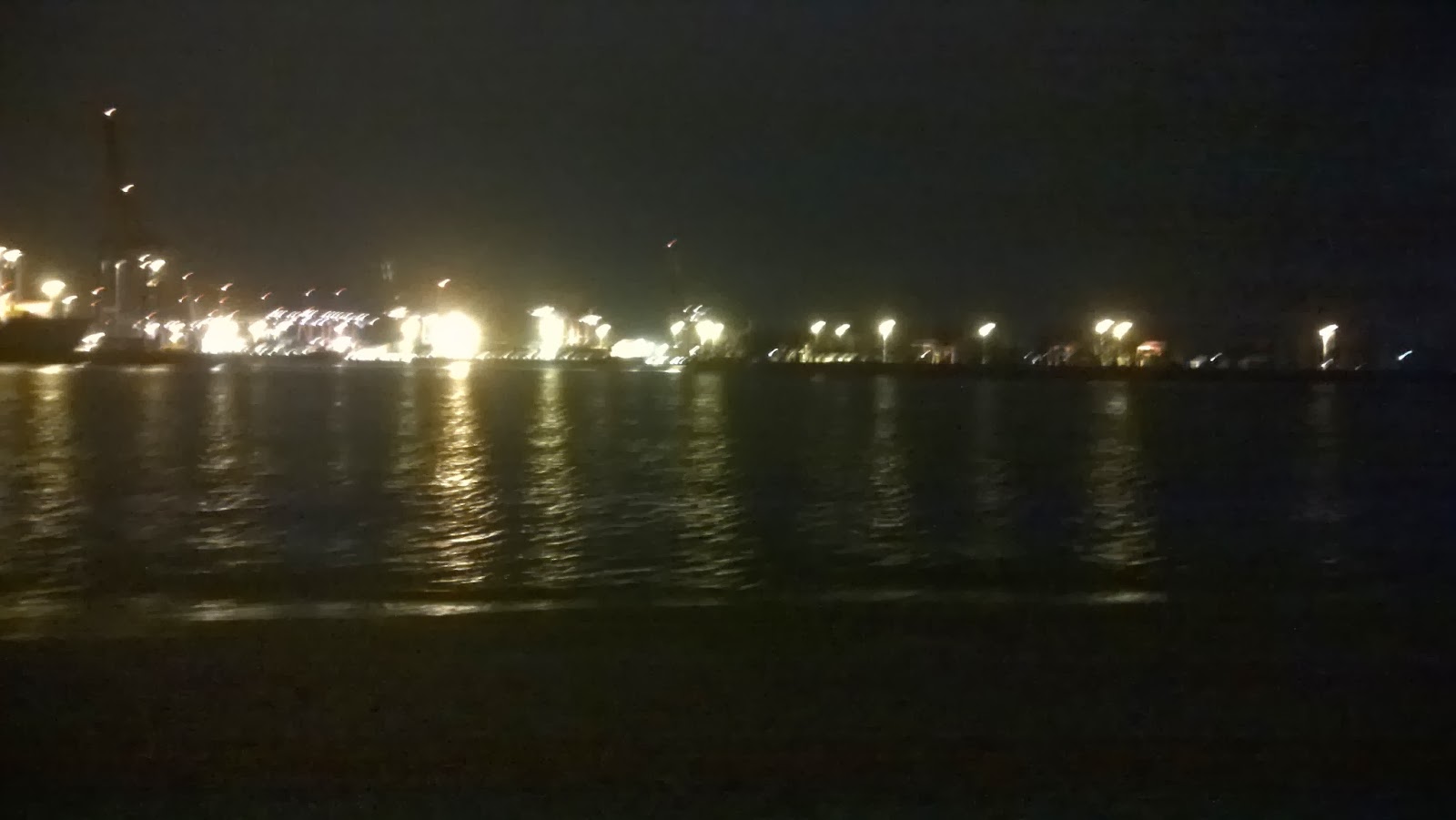 These are some pictures I took on valentines day, when my boyfriend and me went out for a walk. It's near his house, the beach is called Övelgönne. 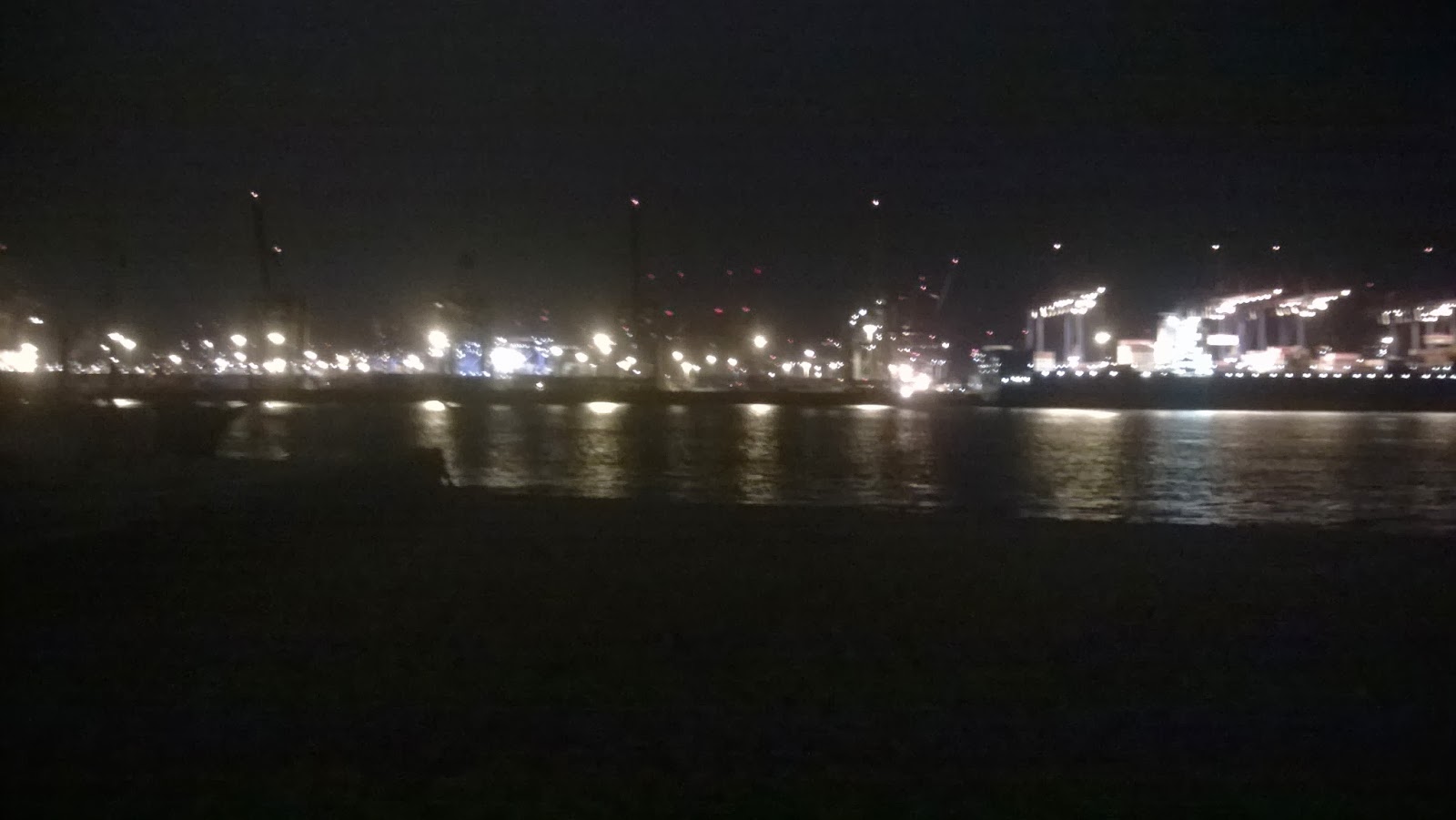 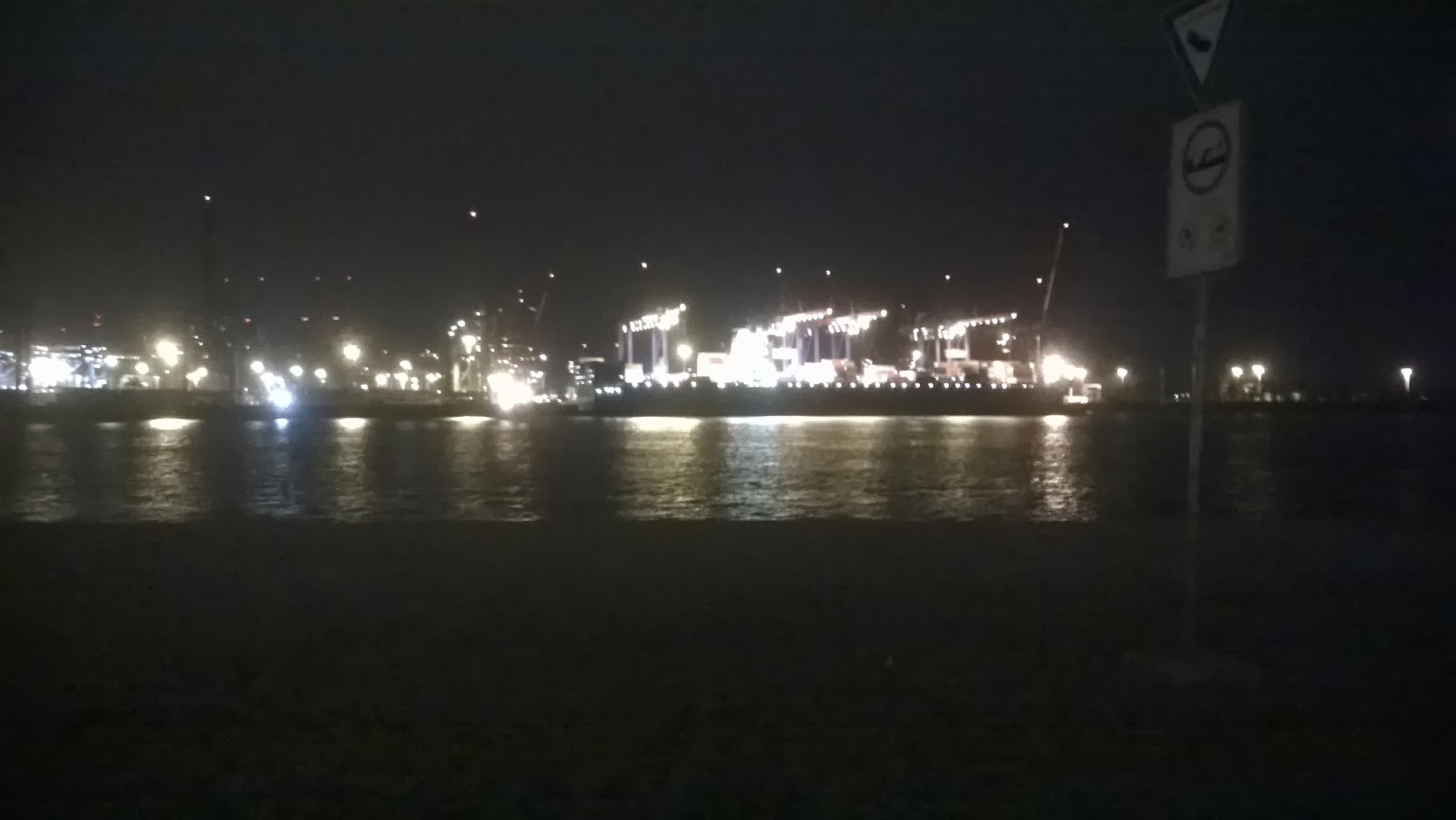 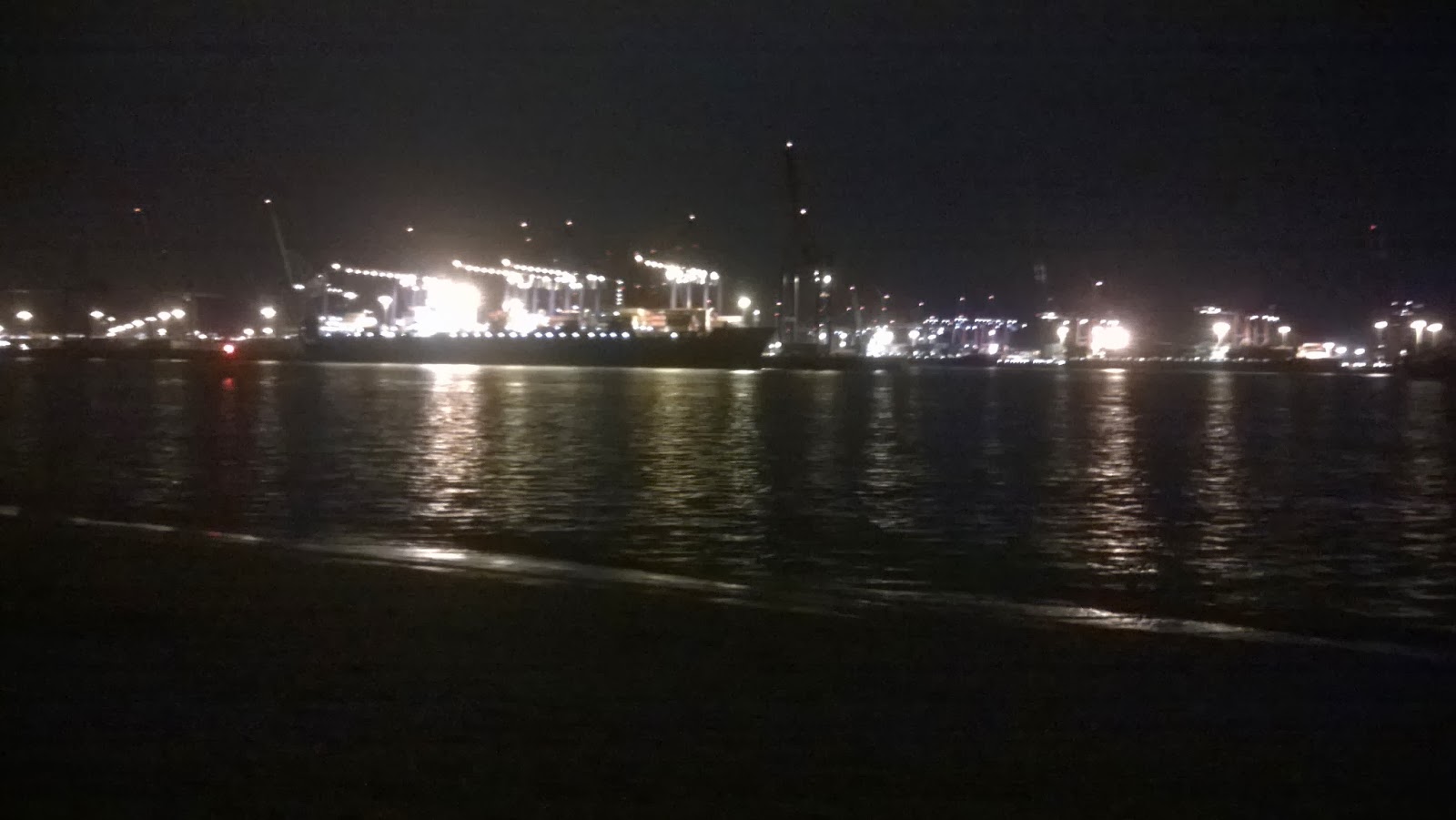 Well, after having black hair for about a half year (which is kinda long for me ^^) I decided, I needed a new haircolour. But first I couldn't decide, I alsways wanted blue hair, but a lot of my friends have blue hair and also I don't like that Directions haircolour washes off so easily. So I decided to dye them red again.

At first I had to make them brighter, therefor I used Syoss Ultra Aufheller

Well, but somehow I really can't bleach my hair, so even after two packages of it, parts of my hair still were almost dark. -.-'

But stil I decided to put the red colour in my hair after it. I used Country Colors Granatrot for it.

I really like the colour although it didn't turn out as I wanted. My hair is now orange, red and somehow black xD


Here a few pictures of my hair and my todays look: 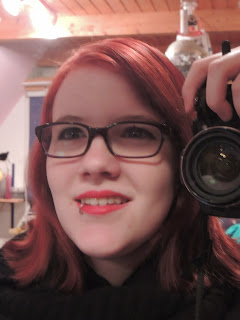 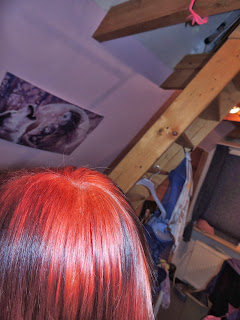 I'm wearing my purple circle lenses, I bought at our local goth store (Colours)
A fake piercing, also from Colours

Argh! Sometimes I feel so stupid! I had forgotten my email and password for logging in and really couldn't remeber it -.-' And today finally, I remembered it (after about 1 hour of trying ^^)

Well, so I'm back now and I can upload some stuff ^^
Right now I'm planning on colouring my hair red tomorrow, so stay tuned for pictures ;)

P.S. I will also upload something for my best friends and mine cosplay blog, as we remebered that we still have it xD (Yey, it's so great remembering login stuff again ;P)
Eingestellt von TenshiSama um 17:54 2 Kommentare:

Finally my holidays started and I used the first week just to relax.

Well, firstly I needed to recover from the trip our class made to Brussels. It was really nice and I really liked Brussels, but still it was hard because it was way to hot for my liking and me had not much time to explore the city :( Some impressions: 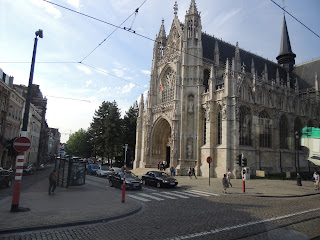 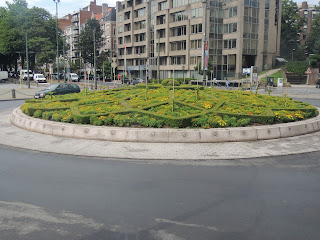 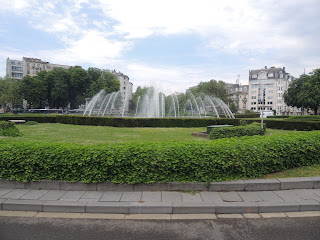 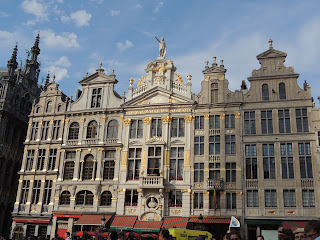 Also I decided that my hair definetely needed some new colour (the purple didn't look good anymore) so i went to the hair dresser and they coloured it black (yey, after three years again xD)

Today I met some friends in the Japanese garden in hamburg and we made a CMV (cosplay music video) for Evanescence's Snow White Queen (can't wait till it's online :)) Tomorrow I'm there again for a photoshoot wearing my Kushina and Temari Cosplay :3

So that's it till now
TenshiSama

As some of you might have noticed, I was way to lazy in the past month to write a blog entry, because we had exam time and I was sooo busy. I felt like my was going to explode and I really needed some time for me, but now, there is only this week of school left, next week we are going to Brussels with my whole yera from school.

Also, i started cosplaying (I have written about that) and a friend of mine and me decided to make a blog together. If you want, havea look at it =D

TenshiSama (I decided to rename my blog, because so it's better with the other one xD)
Eingestellt von TenshiSama um 00:23 Keine Kommentare:

For this years Chisaii Con in Hamburg, I decided to make a cosplay. It was really hard to decide for me, because I had soooo much ideas ^^
I thought about:


But then I found an Akatsuki coat on a german website called 'Kleiderkreisel' and the it was clear: I'm going as Konan from Naruto.

By now I have the coat, a pair of orange contact lenses and maybe a pair of shoes. I still need the wig (found a nice one on ebay), some leggings in latexlook and a top (which I'm gonna make by myself) :D

Here are some pictures: 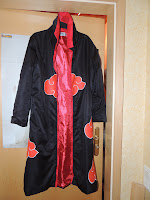 Hei, I haven't been here for a long time, but now I'm finally able to post again ^^

After the orange haircolour didn't really change my hair, I decided to bleach my hair and then dye it red.

(really good for dark hair :D) and my hair turned out quite blond. Unfortunately, I didn't put the same amount everywhere, so my hairline was brighter than the rest ^^
So I used a semi-permanent haircolour, to make my hair red. But it didn't turn out as I wanted it, because my hair was bright orange (way too bright in my opinion). 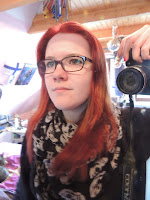 Fortunately, I had some red dye left and
so, in the end, my hair is red now :D